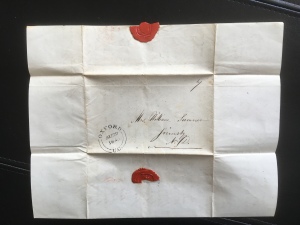 You would long since have received a letter from me had it not have been for want of leisure. You who have lived here must remember what a scene of hurry & bustle the house always presents, but more particularly in the Summer season, and although my own little home was one of quiet and calm, yet my children and household cares employed the most of my time. But although I would not write you my thoughts were very often with you and I looked forward with a great deal of pleasure to receiving a visit from you in my home (I know no sweeter name to call it).

That’s how the letter begins. It was found in an estate sale box filled with old envelopes and stamps, handwritten on a 15.5″ x 10″ piece of paper, in copperplate script so elegant that somehow it makes me sad when I look at it. Did the writer use a quill pen? How did she keep her lines so even and straight – did she use a ruler? After she wrote the letter, she folded the large piece of paper in half, then in thirds, then in thirds again, so that it became both letter and envelope. She sealed the envelope with red sealing wax and addressed it to Mrs. William Summer of Grimsby.

At first it was hard to decipher that lovely, antique handwriting, but it got easier as I went along. The letter is long, from a woman to her granddaughter, filled with news of the health of family members and friends, the longing of the writer for some peace and quiet, her silent worry over her grandniece’s sweetheart, who had left for Provence a month ago. She has not heard from him since he left the isthmus but has been expecting a letter from him for a month past. We all feel a great deal of anxiety about him but we hope and trust for the best.

The letter sits on the table where I’m typing this blog post. Surrounding it is a computer cable, my Precise V7 Rolling Ball black pen, a glass of water, my credit card, a box containing a deck of cards and the score of every one of the hundreds of rummy games the painter and I have played over the last four years, my cell phone, and a plastic hair clip. The letter is the only item on the table that existed, or even could have existed, 168 years ago when it was written.

Do you want to know how the writer ended her letter, the last paragraph of which is not the perfect copperplate of the rest but almost a scrawl, and which also contains an uncharacteristic misspelling? Now my dear Mary I must bid you good night for it is getting late and baby is crying. You and Willie must come up as soon as possible you do not know how anscious I am to see you both up here and I hope you will not let any thing prevent your coming. Believe ever affectionately, your GrandMadame. 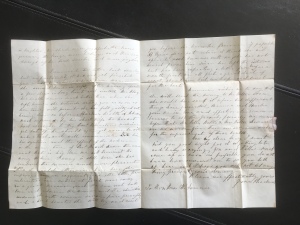 The question must be asked: why does the container of colored blocks to the right of this paragraph keep disappearing? Not in real life, but in this entry. It’s becoming a real problem, and one can only hope that by the time one presses “Publish,” the blocks will still be visible. There are no guarantees, though – not in life in general, nor in this recently snapped crappy cell phone photo.

Another question which must be asked is why does one’s cursor keep leaping randomly over the text which one is typing. Yes, this text, the one which you –if indeed you are out there– are reading right now. The leaping cursor is a recent problem, one which began the very moment after a new operating system was installed on this computer. Coincidence? One thinks not.

And the third and final question: is it possible, or desirable, to write a post in which one refers to oneself only as one? One shall find out.

So, the jug of colored blocks, and the provenance thereof, both of blocks and jug. Two days ago, one journeyed to a nearby city in order to sign some books at a bookstore. On the way out of said bookstore, one noticed a large box filled with clear plastic containers, attractively shaped like small fish tanks.

That was what the sign above the large box read. The urgency of the multiple exclamation marks caused one to smile. One stopped and perused the FREE!!!! containers. Did one need one of these containers? No, one did not. And yet one idly imagined the things that such a container might be filled with, should one bring one home anyway. Tiny plastic babies, for example. Tea candles. Chopsticks. Miniature farm animals made of painted resin. Cookies? No, not cookies.

One took a container home and placed it on the buffet by the window.

Yesterday, a cold but bright and sunny day, one spent five hours –yes, five hours– in one’s car, loitering from block to block in south Minneapolis as two groups of two teenage girls each trudged door to door trying to sell the inhabitants a coupon card for $20 in order to raise funds for their lacrosse team.

Why did one volunteer to trail these girls for five hours in one’s car? One does not remember. It must have had to do with a latent sense of civic duty. It certainly had nothing to do with one’s saleswoman tendencies, which are pretty much nonexistent.

(Enough of this referring to oneself as “one”! How insufferable!)

No, you are not a saleswoman. At all. In fact, you were the type of Girl Scout who bought back all the cookies you were supposed to sell, just so that you would not have to do what the teenage lacrosse players are doing right now.

Why should these people be persuaded to buy a coupon card? The coupons are basically worthless. As the parent of a teenage lacrosse player, you yourself bought one, but that is only because you had to. These are the dark thoughts as you crawl from block to block, making sure that nothing bad happens to the teens as they plod onward.

You pull up alongside one team of two and roll down your window.

“Now girls,” you say. “If a man wearing a bathrobe comes to the door and asks if you want to come inside and see his new puppy, what are you going to say?”

You pull up alongside the other team of two.

“Now girls,” you say. “If a man in his underwear comes to the door and asks you to come inside, he’s got some candy for you, what are you going to say?”

Excellent. It seems that the teens are in good shape. You have taught them well. Surely a quick stop at the estate sale right on this very block wouldn’t hurt anyone.

Out of the car and into the little house you go. It’s Sunday afternoon, the half-off everything time of day for those who, like you, are well versed in estate sales. Dishes, a heavy four-pedastaled table, a folding chair, a picture of Jesus, old muffin tins and coffeemakers, you peruse them all. The non-colors of the house are beige and tan and brown and whitish.

But what is this! Two large zip-lock bags filled with brightness. Red, yellow, blue, green. This is more like it. You are a woman who loves color. No neutral tones in your house, or rather, a few neutral tones here and there in order to set off all the color.

Did the elderly woman of this little house –for estate sales are almost always about elderly women– keep these little bags of blocks around for her grandchildren? Could they possibly be left over from when her own children were little? You decide not to think about this. Estate sales are replete with sadness, when you think about it, and today is a bright and sunny day with teenage lacrosse players trudging from house to house, and you just don’t want to be sad. You decide to make colored blocks in plastic bags a sign of happiness.

Should you get the blocks? What would you use them for?

Yes. Yes, it would be fun. You pluck up the bags of bright wooden blocks and take them to the semi-harried woman at the card table by the door.

“How much?” you say, dangling the bags of blocks.

Two bucks. You walk out the door into the cold sunshine and squint down the block. Why, there are the four teenage lacrosse players. They have not been abducted by predatory men in bathrobes. They have made good choices in your absence. All is right with the world.

You put the blocks in the trunk. The four teenage lacrosse players fold themselves into your tiny car. Off you go to get some ice cream. And when you get home, why look, there is the perfect container for your new-old colored wooden blocks.