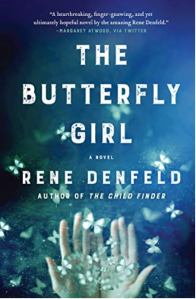 Boiling a work of art down to a few lines feels like an impossible task to me, which is why I dreaded writing book reports as a child (pre-internet, I got around it by writing book reports about imaginary books I dreamed up in my own mind). This is why I avoid book jackets, movie trailers, and podcast episode descriptions in favor of plunging in and figuring it out as I go.

This back-your-way-into-it method is how I first became aware of the writer Rene Denfeld on the This Is Actually Happening podcast. This Is Actually Happening is an unusual podcast in which the grave-voiced narrator, Whit Misseldine, edits himself entirely out of each episode. All you hear is the voice of the person being interviewed. You can sense when a question has been asked and then erased, but the result is a steady, unbroken hour-long stream of a single voice talking about their past, their present, how they got from where they were to where they are. It’s an hypnotic, unsettling way to present a human being.

On this particular episode, per usual, I didn’t know the featured interviewee. She mesmerized me, though. She spoke about her childhood, in which she was sexually and emotionally abused, recounting the events with a deep calm –her mother’s boyfriend, whom she loved, gradually deepened into a horror–and her even, conversational tone never altered. She ran away from home as a teenager and lived on the streets. She told the truth about what had happened to her. By the end of her recounting, the storyteller was middle-aged, her ties to her beloved younger sister had been lost, and the abuser was in prison. You could hear the sadness of that loss, and her love for her sister, and also her mother in her voice.

When she made it out of the brokenness of her early life and turned herself into a strong, grounded woman, she became a foster mother to children who also came from traumatized childhoods, eventually adopting three of them. Her voice slowed, turned tender and low, as she spoke of her children. She would be one hell of a mother, I thought as I listened. She spoke of how mothering children from foster care, no matter how challenging it was at times, was a lesson in the constancy of love and the resilience of both mother and children.

“If I gave up on them, I would be giving up on myself,” she said at one point, and I felt in my own body how being the mother she wished she’d had helped her own childhood pain. At this point something in me rang a bell, a memory of having read this Modern Love essay a couple of years ago about a woman who fostered-to-adopted her children. Could it be the same writer?

Both her voice and her recounting of her life were calm and thoughtful. But there was something else about her that charmed me: her profound kindness in the face of true horror, abuse, and evil. It felt to me that this kindness was the result of a decision on the part of the speaker not to give in to bitterness, to hatred, but to walk toward love and light instead. 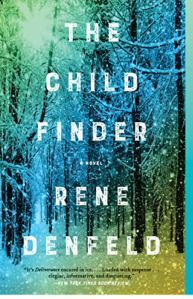 Finally, at the very end of the podcast, the narrator came back on to say that we had been listening to “Rene Denfeld, internationally best-selling novelist and public defense investigator.” I looked her up immediately. A public investigator for a public defender’s office, she has won multiple awards for her justice work with victims and the wrongly accused, including a 2017 Hero Award from the New York Times.

I bought her novel The Child Finder and read it in two days (warp speed for me). The star of the book, Naomi, is a young woman who specializes in finding missing, lost, stolen and trafficked children. The book is set in the mountainous depths of an Oregon winter, and Naomi slowly, with intuition and experience, tracks down a missing child and her captor. As I read, I heard Rene’s voice from the podcast reading to me. Echoes of her own life story were everywhere: in Naomi’s own lost childhood and the abuse she had suffered, in her determination to save the children she could, in the profound empathy, compassion, and understanding she shows even the captor.

It was another six months before her new novel, The Butterfly Girl, was published. I walked to Magers & Quinn the day it came out and bought it. Took it home and read it. This book, too, stars Naomi the child finder, but this time she is searching for the sister she left behind twenty years earlier. The book is in large part the stories of the “street kids” Naomi encounters in the gritty neighborhoods of Portland, Oregon, how they look out for each other and understand each other when no one else will take the time.

Despite the pain and suffering experienced by the children in her novels, Denfeld imbues the books with hope and an implicit faith that if you work toward a better reality, you can make it happen. In this, the novel is like its creator. These are dark times in our country and in the world. When my faith in goodness needs to be shored up, and I need reminding that steady work toward a better world will make it happen, Rene Denfeld is one of the heroes I turn to, both her life and her work. Beautiful human, beautiful writer.

2 thoughts on “Portrait of a Writer: Rene Denfeld”

The Good Things Black People Do, Give and Receive All Over The World

O at the Edges