The memory of a night the spring of my senior year in high school flooded into my head. I had been out at a party, one of the constant parties that seniors seem to have, the same franticness to all of them, as if time were running out. (Never Coming Back, p. 140)

This is the only photo I could find of you. You held an instamatic out in front of you, hoping somehow to capture your own face, and pressed the little black button. I remember exactly when you took that photo. You had just gotten out of the shower. You were wearing cut-offs and that blue workshirt you wore every day back then.

You wondered if maybe you could capture something in a photo that would tell you something you didn’t know about yourself.

Now I look at that photo and I think: You were on the verge. Of so much.

But in retrospect, you’re waiting and you don’t even know it. You’re waiting for the doors of your life to blow open, for the sky to lift high overhead.

What can I tell you now, from this long perspective of time?

You can let up some. You think you have to push yourself every day, that you have to maintain some high rigid standard, be ultra-disciplined, but you don’t. Why are you setting your alarm every morning for 4:45? So sleepy.

Then again, that discipline will come in handy years later, when you have three little kids –yes! you do end up with three kids, just like you wanted!– and you get up at four because it’s the only time you can write in silence.

So many things that you think matter so much right now do not, in the end, matter. Or they matter, but in a way that you’re too young to understand yet.

That one night you’re thinking about, when they took off and left you there? When you get to my age, instead of blaming yourself –too ugly, too boring, all my fault– you’ll shrug and think, it’s clear that whatever I was back then, I at least wasn’t mean.

All those times on the schoolbus, in school, walking the dirt roads past broken-down trailers, when you feel helpless in the face of others’ pain, will eventually be transformed into art. Even if you feel right now as if you’ll break apart from it, it will be worth it.

Most everything that you are going to live through will, in the end, be worth it.

It’s too late to go back and re-do things, but if I could, I’d tell you a few things that you’re too young to know:

When your grandmother and your father and your mother tell you not to change your plans, that the tickets are nonrefundable, that he knew how much you loved him, don’t listen to them. Go to your grandfather’s funeral, because when you don’t, you will forever regret it.

You don’t need to wash your hair every day.

Don’t listen when people tell you that love fades, that it becomes humdrum, ordinary, that this is the way it is for everyone. It’s not.

You are not ugly the way you fear you are.

Don’t be so afraid, out of self-consciousness, of trying things that it seems as if everyone around you already knows how to do. Skiing, for example. In two years you’re going to go to a college that has its own snow bowl; learn to ski.

Four years from now, when that boy you have the massive crush on comes to your room in Hepburn Hall with a bottle of wine and a bunch of roses, invite him in. Do not stand there in dumb shyness, your heart beating like a hummingbird’s, and thank him politely and watch his face fall and say goodnight and shut the door. Because that’s something else you’re going to regret forever.

When you’re afraid of something, tell someone.

When you need help, ask for it.

When your insides are whirling around and you feel as if you’re drowning, panicking and desperate, don’t put a calm smile on your face and walk around as if you’re fine.

There are lots of people who would love to help you.

There are lots of people who love you. You don’t know that yet, but you will.

In some ways, you’re going to live your life in reverse of most people your age. Awful things are going to happen to you when you’re young, and you’re going to feel much older than your friends. For many years your interior will not match your exterior.

But guess what? Time will go by, and your friends will catch up to you. Life catches up to everyone. The older you get the happier you get, the more rebellious, the less willing to suffer fools, to put up with bad behavior. You’re going to feel so free when you get older.

You are going to be so much happier when you’re older than you can believe possible right now. Most of that happiness will come when you let go of trying to come across a certain way, when you just let people see you for who you are.

It makes me sad that this is going to take you a long time to learn, and I wish I could change it for you, but I can’t.

So many years from the day you held that camera out and hoped this photo would reveal something you couldn’t explain, something you wanted so badly to know about yourself, you will look at it and feel a big sweep of love for that young girl, her whole life stretching out before her, as if she isn’t you. 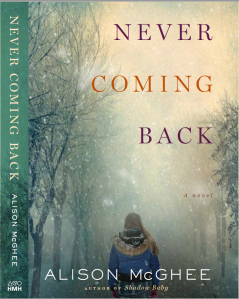 Never Coming Back, my new novel, wrote itself in a compulsive rush. Questions tumbled out across the pages, fierce questions that I have spent my own life asking myself. Why do we so often hide so much from the people closest to us? Why, much of the time, do we assume that there will always be more time? Why, for so many of us, is it only at the end of life that we spill our secrets, desperately seeking to close the distance between ourselves and the people we most love?

How well can we ever really know one another?

Faulkner’s famous, ferocious question was one of the guiding lights behind Never Coming Back, a book about the relationship between two people –Tamar Winter and her daughter Clara– who, despite their profound love for each other, have never been able to talk about the secrets they hold in their hearts. But now Tamar has early-onset Alzheimer’s, and time is running out. Tamar and Clara struggle and stumble toward reconciliation, resolution, and clarity. They try, and try, and try again. Like most of us.

2 thoughts on “Never Coming Back(story): Letter to my sixteen-year-old self”