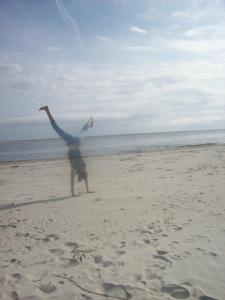 I’m going through my entire house, cleaning and sorting and organizing and paring. Most things I can jettison, but the things I can’t ever seem to throw away are cards and notes and notebooks and little scraps of paper with lists jotted onto them. The other day I found one that I had written a long time ago, titled Things I Love. Among them: that one small cup of coffee with heavy cream at dawn, the way the little white solar lights look when they flicker on at dusk, the raspberries that ripen for three weeks each summer, the sound of my best friend’s voice on the phone, time with my parents, time with my children, time with my friends, time with my sweetheart, doing nothing but being. It’s a big fat life and it’s filled with love and today’s my birthday so I’m celebrating, beginning with this beautiful poem by the wondrous Alden Nowlan. Enjoy.

We were talking about the great things
that have happened in our lifetimes;
and I said, “Oh, I suppose the moon landing
was the greatest thing that has happened
in my time.” But, of course, we were all lying.
The truth is the moon landing didn’t mean
one-tenth as much to me as one night in 1963
when we lived in a three-room flat in what once had been
the mansion of some Victorian merchant prince
(our kitchen had been a clothes closet, I’m sure),
on a street where by now nobody lived
who could afford to live anywhere else.
That night, the three of us, Claudine, Johnnie and me,
woke up at half-past four in the morning
and ate cinnamon toast together.

“Is that all?” I hear somebody ask.
Oh, but we were silly with sleepiness
and, under our windows, the street-cleaners
were working their machines and conversing in Italian, and
everything was strange without being threatening,
even the tea-kettle whistled differently
than in the daytime: it was like the feeling
you get sometimes in a country you’ve never visited
before, when the bread doesn’t taste quite the same,
the butter is a small adventure, and they put
paprika on the table instead of pepper,
except that there was nobody in this country
except the three of us, half-tipsy with the wonder
of being alive, and wholly enveloped in love.