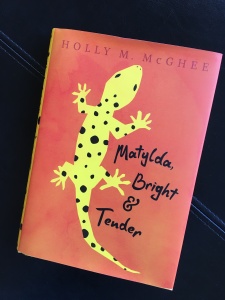 Behold the beautiful cover of my sister Holly’s beautiful new children’s novel Matylda, Bright and Tender (a title I love so much that I say it to myself over and over). Matylda is a leopard gecko, cared for with wonder and devotion by two nine-year-old best friends named Guy and Sussy. There’s a special kinship between Guy and Matylda, whereas Sussy is a little more diffident, a little unsure of herself. Sussy wonders whether Matylda will ever be as close to her as she is to Guy.

But when something awful and unpredictable happens, Sussy is all Matylda has left. It’s up to Sussy to go on alone without her best friend, the one who intuitively understood their pet. Sussy has taken a vow to carry on and do right by Matylda, but at the same time, the mere act of living, of going on with her own life, let alone caring for Matylda, is almost more than she can handle.

This novel is one of those small books that feels vast in its encompassing of tragedy, longing and, ultimately, redemption. How do you go on in the face of something unbearable? Something that no matter how much you wish you could undo, you can’t? Something that, no matter how surrounded you are by love and support, you have to go through alone? The day she lost Guy plays over and over in Sussy’s head. Reconfiguring her life in the face of this new reality is a task she doesn’t know how to do.

Adults who read this book will remember in their bones the long-ago day that time turned for them in just this heartbreaking way. And children will find, in Sussy’s honesty and grief, a memory of courage and love to store away in their own hearts for the future, when they will need it. This is a beautiful book.

One thought on ““Matylda, Bright and Tender””

a journal of growth, change & experimentation

Reflections from an Older Perspective