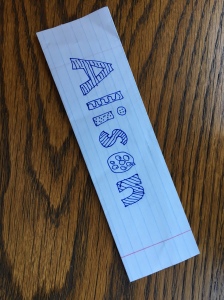 I’ve been teaching a few free creative writing workshops in various Minneapolis neighborhoods over the last week. It’s a small thing, but it’s something that I can do. In one of the workshops yesterday, fourteen participants sat around a big conference table at a library, each with a name sign propped in front of their notebook. They wrote about someone they knew very well, and then they wrote about a moment in their past, and then they jumped off the fictional cliff and wrote a scene between a conjured person and a conjured object. Everyone read everything they wrote out loud, and we clapped after each reading. Why? Because each reading was beautiful, or funny, or hauntingly sad, or made us catch our breaths in some unexplainable way. In the room was an older gentleman with cerebral palsy; an E.R. nurse from Somalia; a middle-aged man with his young wife, who was in the later stages of early-onset Alzheimer’s and whose three writings were each about her love for her husband; a military veteran; a trans activist; a born-again former felon; a burkha-wearing mother of three; a million-dollar realtor, and more. Everything that the world needs to be better was in that room yesterday, among those disparate people: the willingness to share, the willingness to listen, and the willingness to imagine. Don’t ever tell me we can’t get along. Don’t ever tell me we can’t be generous with each other. Don’t ever tell me we can’t celebrate someone whose life is fundamentally different from ours. I have seen with my own eyes in hundreds of classrooms over dozens of years that Yes, we can.

I hope that in the future they invent a small golden light that follows you everywhere and when something is about to end, it shines brightly so you know it’s about to end.

And if you’re never going to see someone again, it’ll shine brightly and both of you can be polite and say, “It was nice to have you in my life while I did, good luck with everything that happens after now.”

And maybe if you’re never going to eat at the same restaurant again, it’ll shine and you can order everything off the menu you’ve never tried. Maybe, if someone’s about to buy your car, the light will shine and you can take it for one last spin. Maybe, if you’re with a group of friends who’ll never be together again, all your lights will shine at the same time and you’ll know, and then you can hold each other and whisper, “This was so good. Oh my God, this was so good.”

For more information on I Wrote This For You, please click here.