Scrolling through a few hundred poems this morning, no poetry goal in mind, I found this one by Mary Karr. It flung me back into memories of my long-ago cat Clemens, who appeared in my life one night when we were eating salmon. He hurled himself up from the ground and clung to the screen window of our first-floor apartment, yowling. We took him in and he never l 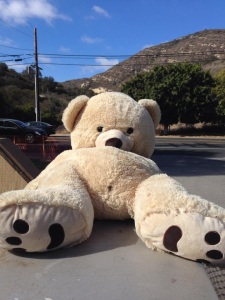 eft. Clem was born to the streets and it was not possible to keep him inside all the time. He was a street cat, a warrior, scourge of the feline neighborhood. One day I returned home to find him lying on the front lawn, near death, one eye gouged half-out, deep wounds in his tail and sides that took him weeks both in the hospital and at home to recover from. He loved running water and sometimes I let the kitchen faucet trickle just to watch him crouch in the sink, batting at it. His nickname was shui mao, which translates as water cat. He loved tall boxes just barely big enough to contain him, from which he would stare out, sure that no one could see him. When he was nine he developed diabetes. It was twice-daily insulin shots from then on, none of which slowed him down much. He died at 17, having finally become an old, slow cat. Clem was magnificent. I still miss him.

I remember the long orange carp you once scooped
from the neighbor’s pond, bounding beyond
her swung broom, across summer lawns

to lay the fish on my stoop. Thanks
for that. I’m not one to whom offerings
often get made. You let me feel

how Christ might when I kneel,
weeping in the dark
over the usual maladies: love and its lack.

Only in tears do I speak
directly to him and with such
conviction. And only once you grew frail

did you finally slacken into me,
dozing against my ribs like a child.
You gave up the predatory flinch

that snapped the necks of so many
birds and slow-moving rodents.
Now your once powerful jaw

is malformed by black malignancies.
It hurts to eat. So you surrender in the way
I pray for: Lord, before my own death,

let me learn from this animal’s deep release
into my arms. Let me cease to fear
the embrace that seeks to still me.