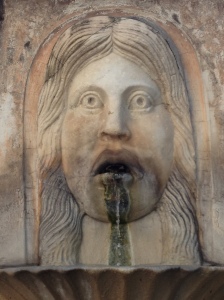 When I was a kid, the school bus I rode back and forth to school was a horror show of cruelty perpetrated by bullies who were aided and abetted by the bus driver. Every four years I pretend to be British (a six-week election campaign! silence until September!) but it’s not working. Being bullied, watching others be bullied, staying silent about the crime of bullying, watching the as-yet-unbullied align themselves nervously behind the bullies with the goal of not being bullied themselves are all part of the same putrid bully swamp. A poem about someone rejecting the surround-sound meanness, even covertly, even though he’s scared, can act as partial antidote to the poison. Poem of the week, by Alden Nowlan.

Five laths in a cotton dress
was christened Flossie
and learned how to cry,
her eyes like wet daisies
behind thick glasses.

She was six grades ahead of me
and wore bangs; the big boys
called her “The Martian,”
they snowballed her home,
splashed her with their bicycles,
left horse dung in her coat pockets.

She jerked when anyone spoke to her,
and when I was ten
I caught up with her one day
on the way home from school,
and said, Flossie I really like you
but don’t let the other kids know I told you,
they’d pick on me, but I do like you,
I really do, but don’t tell anybody.
And afterwards I was ashamed
for crying when she cried.