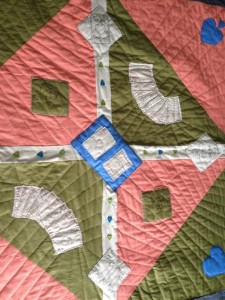 The day after I moved to Minneapolis, I bought a sewing machine. This was in the days of newspaper ads, and I found a used one for $60 and insisted my then-boyfriend and I track it down that very day. That ancient, impossibly heavy machine is what I’ve used to make all the quilts I’ve ever made, sewing together blocks I hand-stitch piecemeal. Story quilts, every one of them, made not according to a pattern but out of my head and heart.

All these years since I bought that machine, I’ve wondered why I was so determined to get it when I was still surrounded by unpacked boxes and bags. I mean, a sewing machine? Strange. Now I think it represented security in a bewildering new place. Making friends had always been like breathing to me –easy, automatic, not something to think about–but it felt almost impossible when I moved to Minneapolis. Back then it was not the cosmopolitan city it is now, with young residents coming and going. People hung out with the same friends they’d had since kindergarten.

In retrospect, I was lonely, always trying to curb myself, be on the lookout, quiet my quick east coast way of speaking when out with my boyfriend and his friends. Maybe the sewing machine was something I could turn to for solace, something that the lonely girl I was could use to turn scraps of imaginary ideas and real fabric into something beautiful. Like the wondrous Naomi Nye says below, maybe it was a way to re-invent what my life had given me.

You can’t order a poem like you order a taco.
Walk up to the counter, say, “I’ll take two”
and expect it to be handed back to you
on a shiny plate.

Still, I like your spirit.
Anyone who says, “Here’s my address,
write me a poem,” deserves something in reply.
So I’ll tell a secret instead:
poems hide. In the bottoms of our shoes,
they are sleeping. They are the shadows
drifting across our ceilings the moment
before we wake up. What we have to do
is live in a way that lets us find them.

Once I knew a man who gave his wife
two skunks for a valentine.
He couldn’t understand why she was crying.
“I thought they had such beautiful eyes.”
And he was serious. He was a serious man
who lived in a serious way. Nothing was ugly
just because the world said so. He really
liked those skunks. So, he re-invented them
as valentines and they became beautiful.
At least, to him. And the poems that had been hiding
in the eyes of skunks for centuries
crawled out and curled up at his feet.

Maybe if we re-invent whatever our lives give us
we find poems. Check your garage, the off sock
in your drawer, the person you almost like, but not quite.
And let me know.

The river is famous to the fish.

The loud voice is famous to silence,
which knew it would inherit the earth
before anybody said so.

The cat sleeping on the fence is famous to the birds
watching him from the birdhouse.

The tear is famous, briefly, to the cheek.

The idea you carry close your bosom
is famous to your bosom.

The boot is famous to the earth,
more famous than the dress shoe,
which is famous only to floors.

I want to be famous to shuffling men
who smile while crossing streets,
sticky children in grocery lines,
famous as the one who smiled back.

I want to be famous in the way a pulley is famous,
or a buttonhole, not because it did anything spectacular,
but because it never forgot what it could do.